In the great cafe of life our experiences count for a lot. In this space we mingle, enjoy the company of others and learn from their wisdom and life lessons. In the Rainbow Cafe things are more specific. Alayna M Cole and Dakoda Barker have created a space where we get to talk to others in the LGBTQ+ community to learn a little from their combined experience. Providing support, new ideas, and maybe helping to open the player’s eyes to new possibilities.

Taking on the role of the nameless  (and entirely without dedicated identity) protagonist the player is welcomed into the Rainbow Cafe, a place to grab a drink, wander, and talk to the many characters who openly share their experiences of who they are, and how they perceive gender and sexuality. Adorable art and an open environment is welcoming and the perfect place to talk to new people. 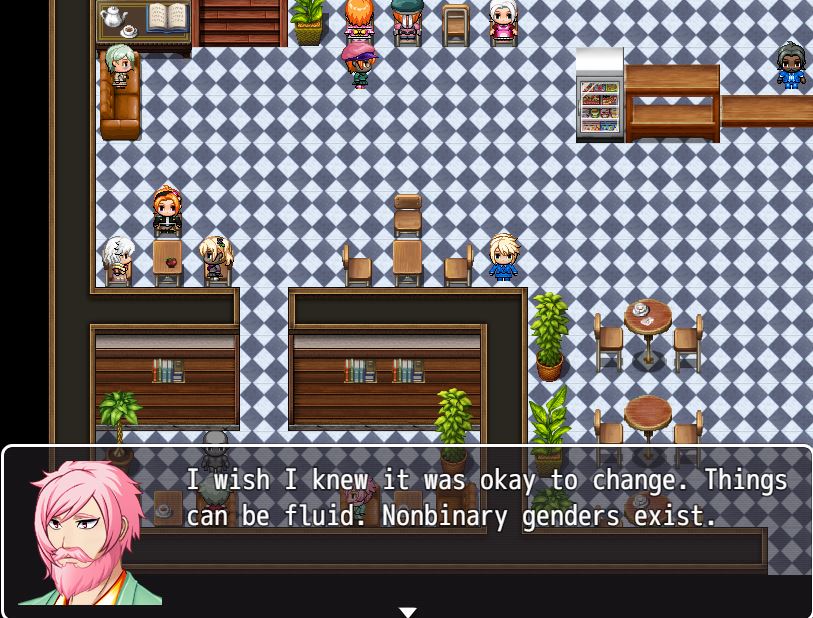 Bringing up many different subjects in the broad LGBTQ+ spectrum Rainbow Cafe talks origins, discussions on coming out early or later in life, responses from those around them, and a sense of a solid community no matter who a person is. 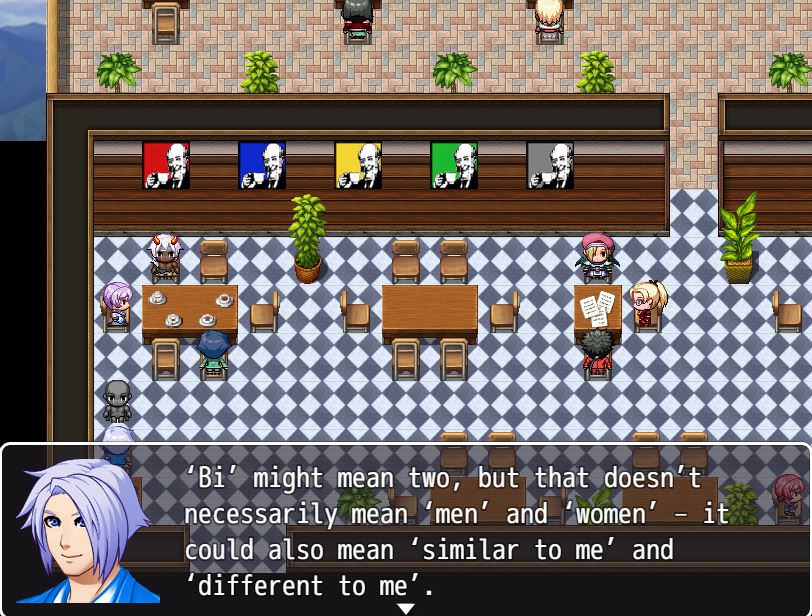 Rainbow Cafe is as much about education as it is expression. The characters here voice the thoughts of real people in the community and reflect their opinions and often hard-won wisdom. We learn that not only do people change throughout life as they learn about themselves and the world around them, but also they change the very nature of language to be more diverse and inclusive.

Taking about half an hour to experience the joy that is Rainbow Cafe this is the kind of game you can play again and again, talking to people to help build your sense of self, or maybe just to chill out in a calm space full of friendly people when you need a positive environment.

Rainbow Cafe is the epitome of digital diversity. Combining positive representation in a virtual space.

Go pick it up at Alayna’s Itch.io page

One of the creators of Rainbow Cafe, Alayna M Cole answered a few questions about their game.

Kaiju: Rainbow Cafe is a unique experience in that it gathers the thoughts and feelings of so many members of the LGBTQ+ community. How was the response from the community when you asked for people to volunteer their experiences? Were people enthusiastic to tell their stories or did you find it difficult to get what you needed to represent everything you wanted to achieve?

Alayna: I was overwhelmed by the response! At first, I knew I wanted to make a game that made people more aware of queer experiences or helped people navigate their own identity journey, but I wasn’t sure exactly what form that game might take. People were so open and honest in their conversations that I quickly realised I needed to make a game that reflected that attitude. I worked with my partner, Dakoda, to create Rainbow Café as a vehicle for sharing those stories, and in the end, we didn’t even have enough space to share them all. The originals are still available to read in the replies to this tweet.

Kaiju: Were there any notable lessons you learned in creating Rainbow Cafe? Things you have taken away from the development process that you look forward to using in future projects?

Alayna: I have always been aware that diverse stories want and need to be told, but I didn’t realise they would be so freely given and so well received. Rainbow Café seems to have made a significant difference in people’s lives and I’m looking forward to continuing to expose people to these stories in the hopes that it helps them understand themselves and others better. Going forward, I intend to use this newfound optimism that people are keen to share their stories as a way to inspire additional game making projects.

Kaiju: What issues or elements do you believe need to be represented more in games that would help the queer community?

Alayna: It needs to go beyond the traditional tale of coming out. There need to be more stories of queer folks just existing, queer people who have settled into their identities for years and who can share their wisdom, environments that are supportive of queer people rather than a constant threat to them. In games and other media, narratives typically like to explore the conflict and confusion of queerness, and use this as a plot point, but it’s incredible valuable to also have queer characters whose queerness is not a struggle.

Kaiju: Queerly Represent Me is such an incredibly vast commitment, have you got any future projects you’re enthusiastic about outside of that? Other games you’re working on perhaps?

Alayna: Queerly Represent Me is huge, you’re not wrong! But I am working on a couple of games at the moment. I’m the writer on a game called Problems and Pumpkins that should be coming out later this year, and is a mobile match-3 game about a kickass witch. I’m also dabbling in developing another game about plants, but it’s in its early stages. 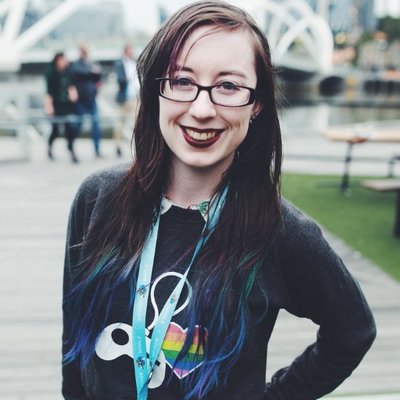