Most of these subjects don’t come up in the interview, just making sure you’re prepared for anything. 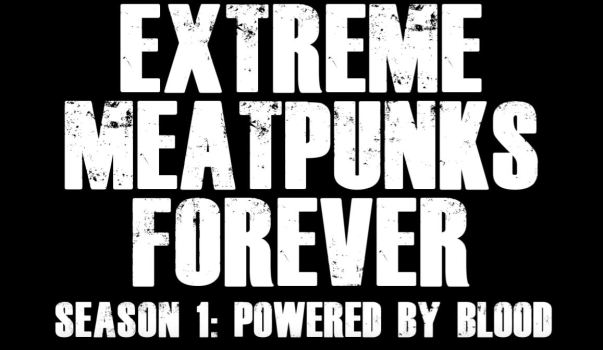 Kaiju: Today on Digital Diversity I’m speaking with the creator and the composer of EXTREME MEATPUNKS FOREVER, a visual novel with mech brawling and difficult life choices. Welcome Heather Flowers and Josie Brechner.

It’s fantastic getting to interview you both over a game I am utterly fanning over. Please introduce yourselves, tell us a little about what you do and what parts of EXTREME MEATPUNKS FOREVER you worked on. 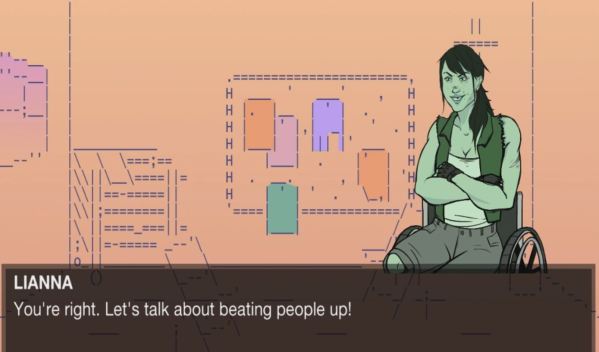 Heather: Hello! My name’s Heather (she/her). I’m an independent game developer. I had a lot of jobs on this project — I worked as programmer, writer, artist, designer, and project manager, to name a few!

Josie: Hi! I’m Josie (she/her, they/them) and I make music for games under the name Visager. I wrote the soundtrack!

Kaiju: So the first question I obviously need to ask is what the heck is EXTREME MEATPUNKS FOREVER? It’s definitely not your everyday visual novel.

Heather:  EXTREME MEATPUNKS FOREVER is half visual novel, half mech brawler! The standard line I give folks is “four gay disasters beating up neonazis in giant robots made of meat” but that doesn’t quite get to the heart of it.

It’s a game about accepting failure and loss, about healing from trauma, and about how great it feels to beat the hell out of a fascist.

Kaiju: I can testify to how great it feels throwing fascists off cliffs in the game. Especially with the rocking soundtrack.

Speaking of which, Josie, when did you come onto the project and what was your approach to making a soundtrack for a game like this? I haven’t been able to get the music out of my head all night so you definitely did things right, haha.

Josie: Aw thank you so much! Heather tentatively reached out to me about working with her last January, and we met up in March at GDC for the first time and kicked things off shortly after that. She had a super clear vision of the kinds of sounds she wanted built into the music (our references included songs from Against Me, Mountain Goats, the Adventure Zone and Celeste OSTs to name a few!) So that gave the music a really strong foundation that was fun and easy to work from. Kaiju: Do you both have a favourite track that really encapsulates what EMF is for you?

Heather: That’s a tough question… I’d probably say CRASH QUEEN, Lianna’s fight theme. It’s loud and boisterous and messy and fun, which is a lot of what I tried to capture in the game’s design.

Josie: Yeah! I also think Sam’s fight music, ROOTS AMONG ASH, balances the western and punk ends of the soundtrack pretty harmoniously. Before we knew if we’d have the time and money to give each of the four main characters their own combat music, we wanted to make sure this track in particular could serve as a core fight song if necessary.

Kaiju: Those are both such good tracks, all the brawler music sets the combat stages so perfectly. I think my favourite has to be ALL OR NOTHING. It’s that feeling of inevitability that things are going to go one way or another, and the only way you can succeed is to put in everything you’ve got. Gives me chills.

Back onto the game itself, let’s talk diversity because it’s one of my favourite topics in games.

Heather, you’ve got one hell of a diverse cast, Sam, Cass, Brad & Lianna as the main characters alone make up a decent sized chuck of the queer spectrum. Did you start writing the game with those characters in mind? Did they develop as characters the way you expected as you wrote the season?

We came up with Brad and Lianna first, and then Cass, and then Sam, if I remember right. Sam was originally supposed to be the main character’s best friend, and a lot of his plot arc was based around that, so when we took the main character out of the design we had to change Sam’s motives and eventual arc by a lot, but I think it worked out for the best. When it came to figuring out issues of queer identity and diversity, it was never a matter of filling a quota.

The questions were always “What would be the most interesting character decision? What would make this character more compelling?” and I’d like to think we did an okay job on that front.

Kaiju: You did a damn good job on that front. There’s a lot of representation there that I don’t see, even in most queer games; it was great to see queer characters who aren’t just “everything in my life is about being queer”, they all have a lot of character depth to them.

On that note, who are each of your favourite characters and why? Still tossing up between no-nonsense non-binary Cass and always-fighting Lianna as mine.

Heather: I love all of my children equally. Especially the side characters — whenever I introduce a new side character it takes all of my willpower to not bring them along with the rest of the main cast.

Kaiju: What about Ed?

Josie: I’m here to say that I love Brad, I would die for Brad, Brad for President.

Kaiju: I would love to see Brad vocalise a keyboard-smash in the middle of a public address. I would probably have more respect for them than any world leader then.

Kaiju: On that amazingly subtle link the use of language and grammar is something that makes EMF so effective. From the vocalising chat-speak, to the blanking out of slurs, to the beautifully awkward silences. Heather how did you find it writing entirely different modes of speech for each character?

Heather: As a person who grew up on the internet, I feel like it’s perfectly natural to experiment with code-switching via different typing styles. So, for example, Cass very rarely uses capital letters to emphasize their monotone speaking style, while Brad throws in keysmashes and emoticons because he’s a very vocally expressive person. It’s just another opportunity for characterization, and one that felt natural for me to include.

Kaiju: It definitely helps to give each character a unique feel. Cass still has my favourite modes of speech; totally deadpan until they get serious and then OUT COME THE CAPS. You know they mean business.

Let’s get to something more on the serious side. EMF is heavily about the dangers of fascism, fighting back against it and dealing with personal trauma. Did you find it difficult to write something that carried such heavy overtones? Was there any point where you went “nope, this is too much” and moved onto something else?

Heather: I remember feeling that, especially in the later episodes, but I stuck with it. The only way out is through, and I felt that if I left those parts unwritten they would stick in my mind until I could commit them to code. The worst of that was in Episode 5: Last Legs, in which the characters spend most of their time tackling extremely heavy, extremely personal subjects. While I was writing it, I started to jokingly refer to it as “the depression and child abuse episode,” and that’s not entirely inaccurate.

I felt that by leaving those parts out, it would be a dishonest experience. The game needs to be realistic, so that when good things do happen they feel hard-won and tangible. There’s no good without suffering.

Josie: Being on the other side of the writing process, I found a lot of the recording for the soundtrack to be heavily cathartic. On my end, Heather, I feel like your words gave me an outlet to explore and express things through the music that helped me personally reclaim some feelings of sanity and power at a time when bigger-picture things feel so off.

Kaiju: Time for a hypothetical: You’ve been given the time and resources to make any personal project you want. What do you do with this awesome power?

Heather: This is a dangerous question to ask. Pick a number between one and three.

Heather: The basic pitch: an open-world stealth game called GEHENNA where you play as a researcher twenty thousand years in the future exploring the desert around an ancient nuclear waste disposal site that was walled off millennia ago.

Your goal: to learn the rituals of the cultures that live there and write up a comprehensive document on the ecosystem of the mutated creatures that have arisen, from sentient plants to thirty-foot-tall giants known only as Harvestmen.  You have no way of fighting — all your skills are based around communicating, building, and healing — so you have to stick to friendly communities in the daytime and travel the desert by night.

It’s the most massively over-scoped game (I could *maybe* do it if I had five years and a dedicated team) and still the smallest out of the three I have dedicated design docs for.

Josie: Holy heck Heather, that sounds rad. I’m just starting out in programming, but some point soon I want to put the time aside for a mini autobiographical game I’ve been dreaming up about my experience dealing with bathrooms.

Basically recasting the daily experience of selecting a safe bathroom as a never-ending purgatory maze. I’m also trying to put positive vibes out into the universe for someone to hire me to organize a soundtrack for a game that’s made up of songs composed by all different folx. I think making an original collaborative score in that way could be really cool and unique!

Kaiju: Ohhh, those both sound like amazing projects, I really hope to see them come to light some time in the future. GEHENNA sounds right up my alley and we all need more games about bathrooms.

With the first season of EXTREME MEATPUNKS FOREVER completed what’s next on your project list? Are you both rolling right into season two or do you have other things cooking?

Heather: We’re gonna take a little time before diving right into season 2, partially to rest and partially to focus on other artistic pursuits. I’ve got a couple different irons in the fire personally, but now’s not the right time to reveal them 😉

Josie: I’m about to start working on music for the demo of My Electric Heart (@MEHgame) a game about body-sharing, crime-fighting robots, which I’m extremely stoked on. It’s being made by a bunch of awesome folx, including Manolo Rosenberg (@autolikescake) who also did the sound design for MEATPUNKS!

Kaiju: Thank you Heather and Josie for joining me today. It was awesome having you in on my play-through of EXTREME MEATPUNKS FOREVER and even more awesome to have you here to talk about it today. It was great getting to fight fascists with you and I hope everyone has an equally fantastic time throwing them off cliffs in your game.

Josie: Joining your stream last night was super fun! 10/10 would punch again. Thanks for having us on and chatting with us here!

Heather: What Josie said — thank you for having us!!

The soundtrack is available on Bandcamp

You can find Heather on Twitter and more of her work on Itch.Io

Want to support the Digital Diversity project? Buy us a Ko-Fi