(Content warning: The following review/interview is for an 18+ rated game that contains sexual situations including sex work, drug use, and other possibly sensitive situations. These points may not all be discussed in the interview but are present if you play the game)

Gigolo wants to escape their tedious office existence, so when their uncle offers them a farm of their own to start a peaceful rural life they do exactly what anyone else would do; decide that what they really want out of life is to go out, get laid, and have the best hedonistic life in the city they can!

Gigolo Sim is a new RPG made by TheLastYuriSamurai and is the antithesis to the peaceful farming life simulators out there. But it’s not all chaos and depravity, there’s also charm, character, and plenty of silly fun to be had.

So let’s talk to Yuri and find out more…

Kaiju: Welcome to Digital Diversity, a series shining spotlight on games made by the LGBTQIA+ community by playing their games and talking to the creators.

Today we are talking to Yuri, creator of Gigolo Sim. A silly and adorable RPG about sex positivity, nerd culture and collecting cookies.

Welcome to Digital Diversity, Yuri! It’s great to have you here. Please tell us a little about yourself and Gigolo Sim.

Yuri: Thanks so much for having me, Kaiju! Well, I’m yuri, or TheLastYuriSamurai as you can find me online and my goal is to make more games specifically for the LGBT community! From my light-hearted Stardew Valley-esque gay monster sim (Monster Village) to my most recent work Gigolo Sim, I just want to make the kinds of games that queer adults will love to play!

As far as Gigolo Sim goes…. Imagine that Stick RPG and Pico Sim date had a very kinky conjugal visit under a rainbow canopy. It’s at it’s core a story of a pansexual man tired of his mundane life. He’s tired of his office job and wants to do something better with his time. While he’s offered to “go take over the farm in some valley somewhere” he doesn’t want to do that. He just wants to get laid. Repeatedly. So it’s his adventure in the big city pulling men and women, working all kinds of ridiculous jobs, and finding the most out-there Easter eggs I could think of to hide in the game! I wanted a game that oozed sex, but consent and positivity as well. While the term “gigolo” means, for lack of a better term “a male prostitute”, he wears the name proudly, bearing no shame or hang ups whatsoever on it. 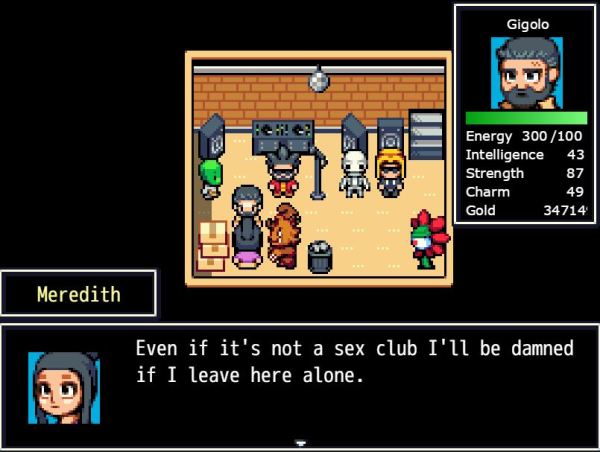 Kaiju: Obviously the first question I need to ask is what inspired you to make Gigolo Sim? It’s such a different kind of RPG, and something I’ve not seen done before, what made that lightbulb in your head go off and drove you to make a game like this?

Yuri: So the three games that I made either had darker endings and themes (monster village having a surprise ending and limbo party being a more psychological horror) or just performed badly (ace of hearts).

I wanted to make a more lighthearted game that was nonsensical and funny, and when I saw two concurrent game jams, a lightbulb went off in my head! The two jams in question were Cosmo D’s Jam: The City and The Strawberry Jam 3 (which is a nsfw game jam). When I saw the two I was instantly reminded of the dating sims I played as a closeted young teen. I could play as a male and romance the ladies, and it made me happy to play games that let me be (sort of) gay. So I decided to make a similar game that I would have loved when I was younger! 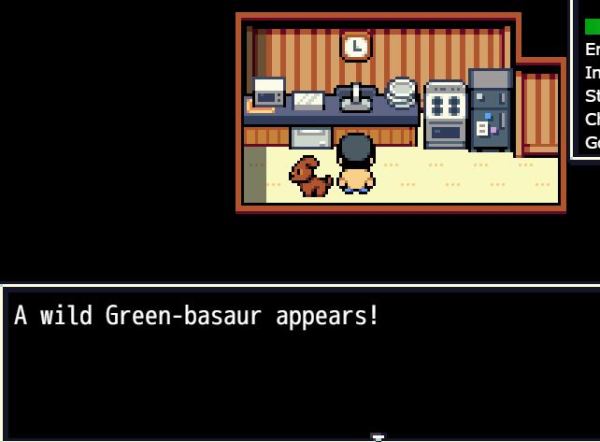 Kaiju: Young me would have loved this one too. There’s a lot of 90s/early 2000s pop culture references that I would have laughed myself off my chair to.

I really love that the basic premise of the game is “I don’t want to go be in Stardew Valley”, which in itself is a pretty fantastic statement considering the popularity of near isolationist games. Do you think there’s something missing from games like Stardew that makes the prospect less than attractive? Our protagonist for Gigolo Sim definitely thinks so.

Yuri: I think that Stardew Valley is an absolute masterpiece, no doubt about it! I think the escapist’s dream of going somewhere far away and starting a new life completely different as a farmer is a dream everyone can get on board with… but there isn’t always a valley somewhere to go to, and not everyone wants to grow plants.

Not everyone wants to have a pg-13 future where they grow some plants, meet a singular love interest, and spend the rest of their lives in a sunny valley. Some do, and damn isn’t it attractive, but not everyone wants that. Some people want to go to the big city and just have an adventure. They want to play a game where they can meet the kind of ridiculous people they would love to be friends with. That they can apply for really questionable jobs as a stripper for an old Russian woman. Some people want a different kind of story to play out, and I think my game offers that, Gigolo certainly seems to enjoy it! 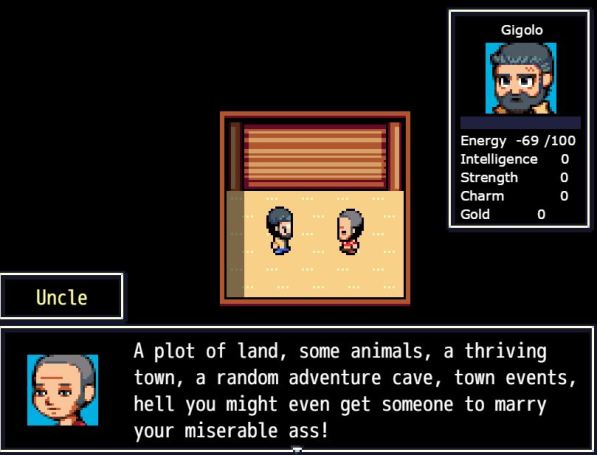 Kaiju: Gigolo has for sure found their place in the city. They really wouldn’t be happy in Pelican Town raising chickens, although they would probably love all the cock jokes they would get to make. Although that just makes me wonder how all the eggs your hens lay are fertile despite the lack of roosters…

Yuri: Oh man I missed out on making more cock jokes in the intro!! hahaha. As far as a favorite character? Babushka and the sexy teacher, hands down. There were so much fun to write in very different ways. Babushka because it was just so random and fun, and the sexy teacher because…. I enjoyed her character sprite. In all honesty out of all the sexy dialogue I genuinely found hers the best. She just felt very unapologetically into the student/teacher fetish and it was a joy to write. Some times dialogue can take me awhile to think of and write, both those two? An hour between the two of them, tops. Every time someone tells me they were one of their favorite characters it adds a year to my life. 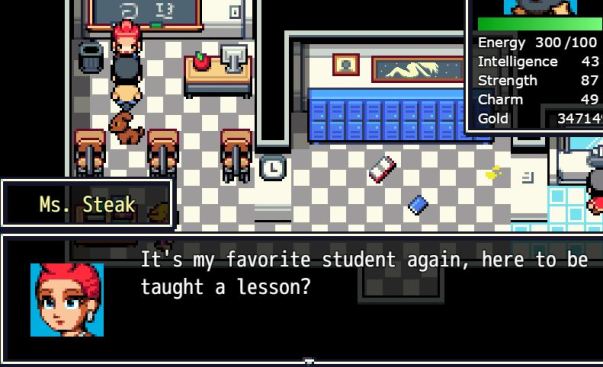 Kaiju: Those two are definitely my favourite too, but then I have a true fondness for characters that know what they want and just go for it as long as everyone is consenting.

This is far from your first game, what are things you learned from your earlier projects, say Monster Village, that helped you in creating Gigolo Sim?

Yuri: Time management!!! And just overall how to use the engine to do something unexpected. Monster Village was my dream game, but looking back at it I should have used that month better. There’s just an overall wealth of knowledge about the game engine I’m happy to say I’ve learned. How to map better, what jokes work well with the audience, all of these are essential skills that all went into Gigolo Sim. I’m also proud to say that this was my first 18+ game, and I like to think it’s gone well. My next game will also be an 18+ game, and I hope to bring all the sexy tricks I learned in Gigolo Sim into my future projects!

Kaiju: “Sexy Tricks” sounds like a game all of it’s own.

Monster Village was your last dream game, but what about your next dream game? What is Magical Game Dev Land for you right now where you get to make whatever you want?

Yuri: Wow… that’s a huge thing to think about. I honestly just want to make more 18+ comedic games!! I want to make a huge 18+ comedic game for my lgbt community! Something people laugh about and talk about and look for hours to find every last bit of hidden content I love to hide in my games (then promptly forget about). Something that’ll put another smile on my girlfriend’s face. One day! 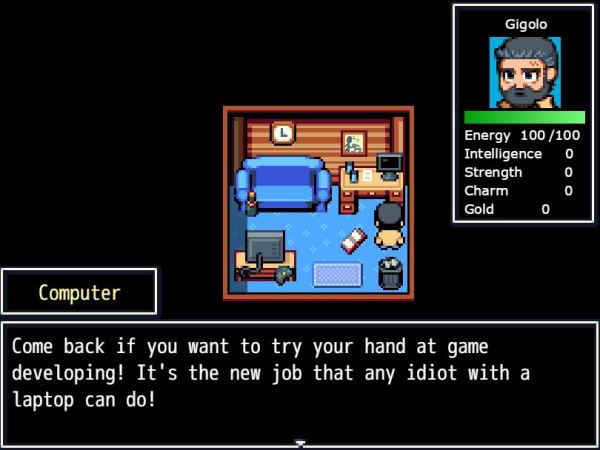 Kaiju: Sounds like a dream well worth pursuing to me!

Let’s look at the wider world of games for a moment. Are there any games that inspire you to make your projects? Games that might have positive representation, or an unfortunate lack of, that makes you want to do more? Games that you fell in love with give you that “I want to do that!” feeling?

Yuri: I’ve been inspired by Pico Sim date. Hahaha on a more serious note though I genuinely love Rune factory 4 and Hardcoded. Rune factory 4 is Stardew Valley on steroids. Farming, crafting, fighting, everything you could ever want to do with an amazing cast of characters. I think it’s a game as close to perfection as I could ever recognize. And then there’s hardcoded. What an incredible 18+ game. So many hidden details and a cast of characters worth so much more than their sex life. These two games are such an inspiration to me. I want to make a game as great and gay as those two!!

Kaiju: Why not combine them both? Something like Hardcoded would be AMAZING as an RPG. Make it big, make it gay, make it lewd, and make it silly.

Let’s round this interview off with a fun one. If you could romance or get intimate with any character from any game ever made who would it be with?

Yuri: Babushka. Hahahaha!!! No no. Hm… Nico Robin from any of the One Piece games, I’ve had a big crush on her since forever. And her ability to er… fight by making multiple hands appear… would sure be handy to have… for housework!! Yeah, housework… 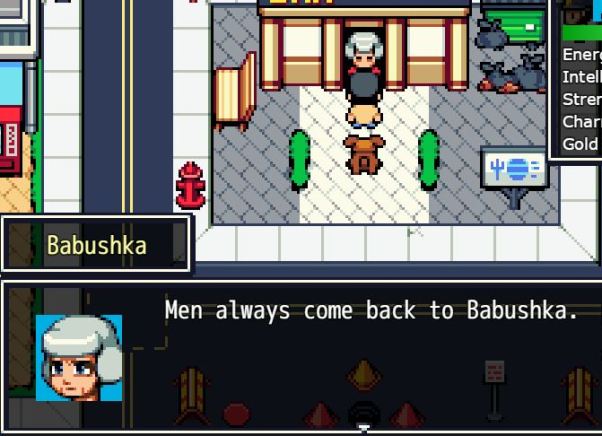 Kaiju: That does seem… handy…

Thank you for chatting with me today, Yuri. It’s been super fun and I love Gigolo Sim to bits. It’s refreshing to have such a charming and light hearted approach to a lot of the elements it contains.

Yuri: Thank you again so much for having me! I think what you’re doing here is worthwhile and incredible! As far as words of wisdom… if it’s something you love, be willing to adapt, but don’t give up!! My game before this only got 1 download in it’s first few weeks of release, and that one download was my friend that I begged to play it! I didn’t give up and Gigolo sim has almost 4k views!! a 4000% increase!! If it’s for a good reason then don’t ever give up!

On a more personal note, I have a Patreon for those who want to get previews of what I’m working on! For every patron exclusive post I make a public one that, while not as in depth, still offers something for those who want to check in! Thanks for those of you who have cared enough to check out my game!! It means the world to me! Making games has helped me keep going when life gets really stressful, and I’m proud to share my creations with you all!

You can pick up Gigolo Sim over at Itch.Io as well as the rest of their games

Want to support the Digital Diversity project? Buy us a Ko-Fi